When you first run create-react-app, you’ll end up with a folder like this: 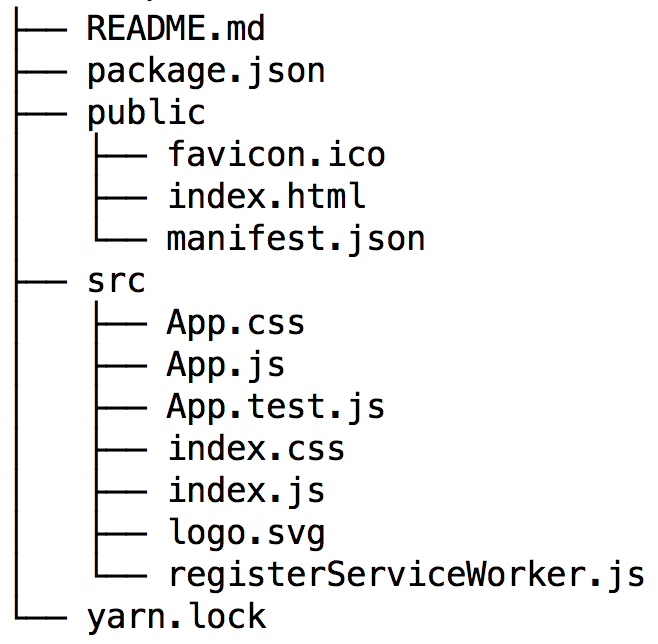 All of the code you write will live under the src folder. You can organize into subfolders as you see fit. But how should you organize it?

For this, you have a multitude of options, which is why it’s such a paralyzing thing. If you screw this up, the project could be doomed right from the beginning! At least, it feels that way.

Let me assure you right here and right now: there is no “one true way” to organize your files. Even better, you can completely screw it up – and through the magic of the mv command and a little work changing some import statements, your project will be just fine.

Don’t worry so much.

But I can tell. You don’t buy any of that. You’re still wondering what the best organization method is. Fine.

Before we go on, make sure you’re familiar with the idea of Presentational vs Container components (aka Smart vs Dumb).

Here’s the folder structure I recommend starting with, and it’s the one I always start with myself: 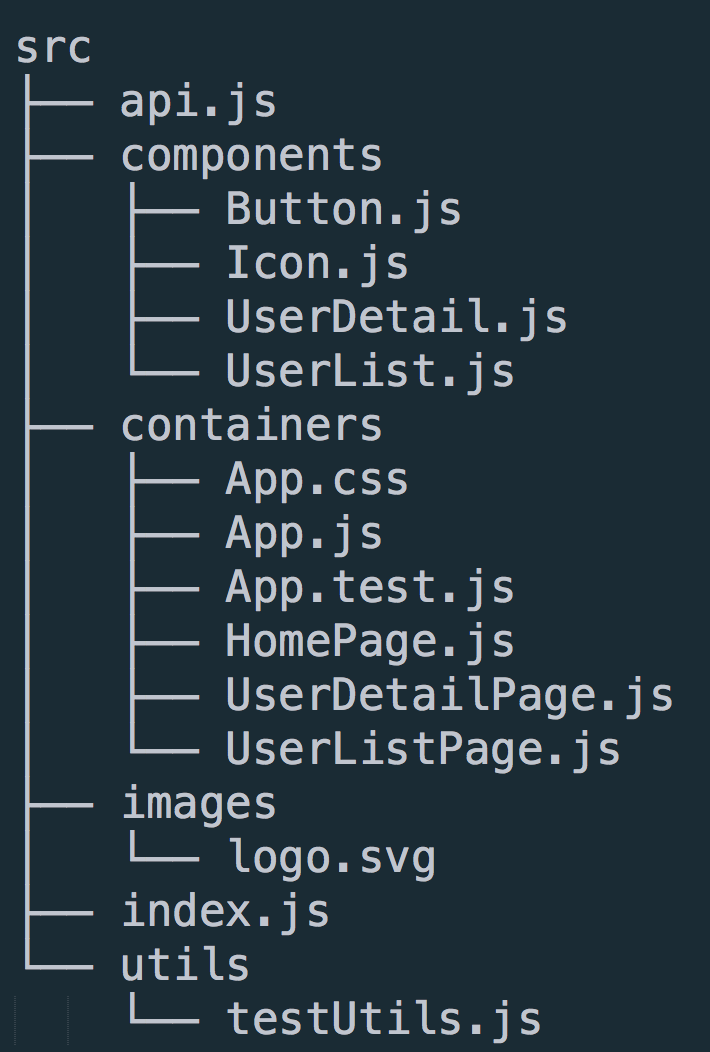 You can make this more granular over time, and move things around as you see fit, but let’s go over what’s here.

My favorite thing about this structure is that it’s simple. I don’t have to think very hard about where to find a component, or where to put a new file. It’s amazing how much time you can save when the only decision you have to make at the time you create a file is whether it’s a presentational or container component.

Create React App supports the NODE_PATH variable for setting up custom import paths. That means you can turn this:

To enable this awesome power, all you need to do is open your package.json file and look for this line:

If you’ve got more than one path you can separate them with colons like NODE_PATH=src:src/components:src/containers.

Jest supports NODE_PATH as well, and to make that work you’ll want to add NODE_PATH to the test script like so:

One caveat: mocks may not work as expected until this issue is resolved.

Since Windows handles environment variables differently, you’ll need the cross-env package to make this work. /ht to Dan Abramov for pointing this out.

And then change the scripts to include it:

If your current level of comfort with React leads you to read articles about how to best organize your project, you probably do not need Redux yet. Learn React by itself first. It doesn’t have to be a full-on Semester of Study or anything – take a few days to learn React, and then go learn Redux.

When you add Redux to your project, start off with something like this:

If you hate having to jump between files to create an action, check out the Ducks pattern where a reducer + related actions + types are all contained in a single file.

An alternative is to organize files by “functional area” rather than “kind”, with folders like users, products, and profile. The users folder might contain UserDetailPage.js and UserListPage.js.

This organization style starts off deceptively simple. Inevitably you end up with a folder like common to hold the Button.js and Icon.js. And then you might want common/containers and common/components. At some point it grows out of control, with directories 3 levels deep, and now whenever you have to create a new file you break out into a full sweat. WHERE SHOULD IT GO?!!

Simple is better. Start simple. Keep it simple, if you can.