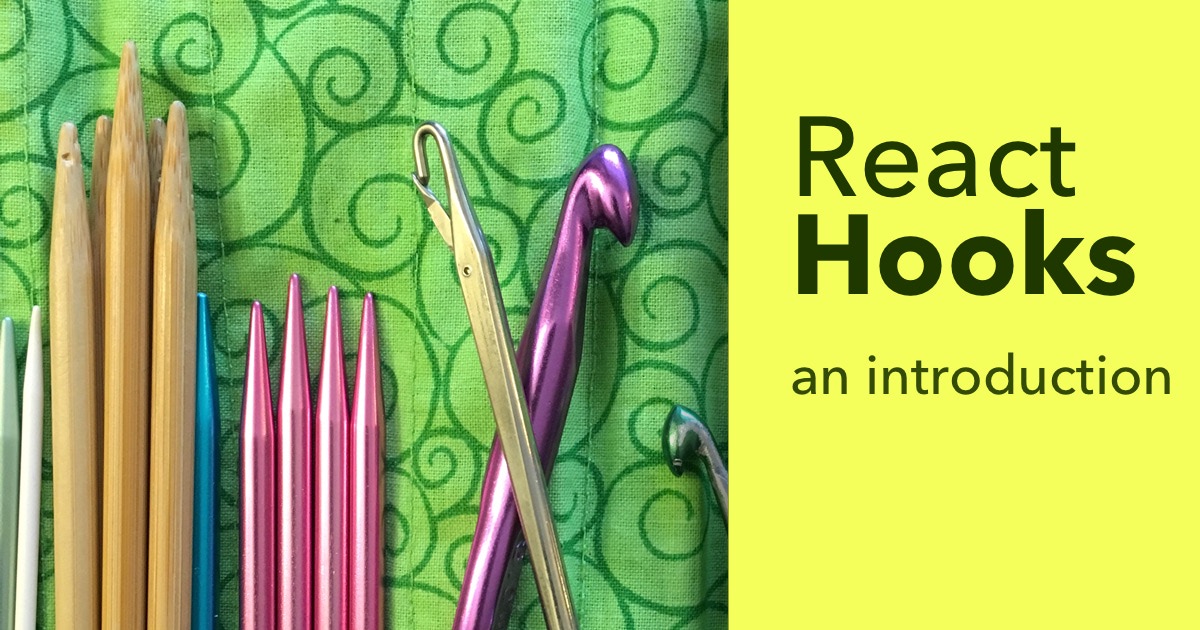 And how class components can extend PureComponent, but function components are stuck rendering every single time?

Well – hooks change all that (and technically that last one is solved by the new React.memo function in 16.6).

Hooks, officially released as part of React 16.8, make it possible to take a React function component and add state to it, or hook into lifecycle methods like componentDidMount and componentDidUpdate (see what I did there).

From here on out, if you write a function component, and later decide that it needs a bit of state, you don’t have to refactor the whole thing into a class. Those functions are no longer relegated to being “stateless function components”.

Hooks don’t replace classes. They’re just a new tool that you can use, if you want to.

The React team has said that they have no plans to deprecate classes in React, so if you want to keep using them, please do!

I know how much of a pain it is to feel like there’s always something new to learn… like you’re always falling behind. (I definitely feel it myself, writing this blog!) I’m treating hooks as a nice new feature to use when I need them, and not like the New Best Way. I’m not planning to go back and rewrite old code to use hooks, and the React team is recommending against that as well.

Let’s see an example of one of these hooks at work. We’ll start with something we already know: a plain function component.

It doesn’t really live up to its name of OneTimeButton yet – all it does is call the onClick function when you click it. We’ll take care of that in a minute.

What we want this component to do, is keep track of whether be it’s been clicked – and if it has, disable the button. Like a one-time switch, of sorts.

But it needs state. It’s a function. It can’t have state. Maybe it’s time to convert it into a class.

Thus begins the 5 stages of Converting a Function to a Class:

So here we go, let’s convert the function into a class:

It’s quite a bit more code, and it’s a big change to the component’s structure. Lots of little changes and rearranging to do. And it’s using some shorthand like class properties that are still not officially part of JavaScript (but are supported by Babel plugins).

Or: Easily Add State With a Hook

Now, let’s see how we can use the new useState hook to add state to the plain function component:

How This Code Works

Most of this code looks like the plain function component we wrote a minute ago, except that useState thing.

useState is a hook. You can tell because its name starts with “use” (that’s one of the Rules of Hooks – their names must start with “use”).

The useState hook takes the initial state as an argument (we passed false) and it returns an array with 2 elements: the current state, and a function to change the state.

Class components have one big state object, and a function this.setState to change the whole thing at once (plus it shallow-merges the new value).

Function components come with no state at all, but the useState hook allows us to add little nuggets of state as we need them. So if all we need is a single boolean, we can create a bit of state to hold that.

Since we’re creating these pieces of state in a sort of ad-hoc way, and there’s no component-wide setState function, it makes sense that we’d need a function for updating each piece of state. So it’s a pair: one value, one function. The value can be anything, of course – any JS type – a number, boolean, object, array, etc.

Now I bet you have a lot of questions. Things like…

Let’s talk about those.

Where Can I Get Hooked?

Any new projects created with Create React App will have the latest version of React, and so will have hooks included.

The “Magic” of Hooks

Ahh, the weird paradox of storing stateful information in a seemingly-stateless function component. This was the first question I had about hooks, and I had to figure out how they worked.

My first guess was some sort of compiler trickery. Searching the code for useWhatever and replacing it with stateful logic somehow.

And then I heard about the call order rule (they must be called in the same order every time), and that just made me more confused. So here’s how it actually works.

The first time React renders a function component, it creates an object to live alongside it – a bespoke object for that component instance, not a global one. This component’s object survives as long as the component exists in the DOM.

Using that object, React can keep track of various bits of metadata that belong to a component.

Keep in mind here that React is the one calling your component. React components – even function ones – have never been “self-rendering.” They don’t return HTML directly. Components rely on React to call them at the appropriate time, and they return an object structure that React can convert into DOM nodes.

So, React has the ability to do some setup before it calls each component, and that’s when it sets up this ‘state.’

One of the things in there is an array of hooks. It starts off empty. Every time you call a hook, React adds an item to that array.

Why the Call Order Matters

Let’s say we have this component:

Since it calls useState 3 times, React would put 3 entries in the array of hooks on the first render.

The next time it renders, those same 3 hooks are called in the same order (because code doesn’t magically rewrite itself between calls), so React can look into its array and say “Oh, I already have a useState hook in position 0, so instead of creating a new state, I’ll return the existing one.”

That’s how React is able to create and maintain state across multiple function calls, even when the variables themselves go out of scope each time.

Let’s look at how this plays out in more detail. Here’s the first render:

Now the array of hooks has 3 items in it, and the render is finished. What happens on the next render?

So that’s it. It’s not magic; but it does rely on a few things being true. This leads to a few Rules of Hooks.

It ain’t Fight Club, but we do have some rules to follow:

The React team created some ESLint rules to catch problematic usage of hooks (install from here), and the linter needs a way to identify “a hook.” Hence the naming prefix. Nothing magical going on there. The linter will be able to warn you if you violate rule 1 or 2, but only if you follow rule 3 ;)

You might wonder… if there are naming rules, does that mean you can create your own hooks? Unlike those clickbait articles where the answer to the question is always “no” – the answer here is YES, you can create custom hooks!

Custom hooks are just functions that follow rule 3: their name must be prefixed with “use”. After that, you can call hooks inside them. They’re a nice way to roll up a bunch of hooks into one.

We could, for instance, extract the 3 pieces of state from the AudioPlayer component into its own custom hook:

So we can create a new function that handles the state and returns an object with some extra methods to make it easier to start and stop playback, for instance:

Once nice thing about extracting the state like this is that you can group related logic and behavior together. You can extract a “bundle” of state and related event handlers and other update logic, which not only cleans up your component code, but it also makes these bundles of logic and behavior reusable.

Plus you can compose hooks together, by calling custom hooks inside your own custom hooks. Hooks are just functions, and of course, functions can call other functions. Here are a few examples of simple custom hooks.

There’s also a video lesson over there so check that out too.

Hooks offer a new way to approach problems in React, and I think we’re going to see a lot of exciting new ideas (and more than a few custom hooks) evolving out of them.

The React team has put together a great set of docs and an FAQ answering questions from “Do I need to rewrite all my class components” to “Are Hooks slow because of creating functions in render?” and everything in between, so definitely check that out.

And hey, open up a new CodeSandbox and try playing around with the useState hook on your own! If you learn something awesome, or run into a weird problem, write up your experience and share it! We’ll all get better at hooks together.