Is one of your Mac apps crashing? If you got a crash report from your users, or an unsymbolicated crash log from Sentry, I’ll walk you through how to decode it into something you can use to debug the crash.

Here’s how to do it manually. I also put together a Ruby script to symbolicate the whole crash report too.

On the error report, select Raw and Unsymbolicated and click Download. The Download button won’t appear until you select Raw. Don’t leave it as the default Symbolicated or else the downloaded log will have a bunch of <redacted> where the memory addresses should be.

Then open a Terminal, and cd to your new folder. We’ll be copying the necessary files here, because they all need to be in one place to symbolicate properly.

3. Open Xcode and the Organizer

In Xcode, under the Window menu, click Organizer to open it up.

This contains all of the archived builds of your app.

Match up the info from the crash log (or the info in Sentry) with your list of releases in Xcode’s Organizer, and pick the one that matches.

Symbolication won’t work right (or maybe at all?) unless all the versions match up.

5. Copy files out of the release

Right-click the release, and choose Show in Finder.

That’ll open a Finder window with a single .xcarchive file in it.

You should see a bunch of folders like this: 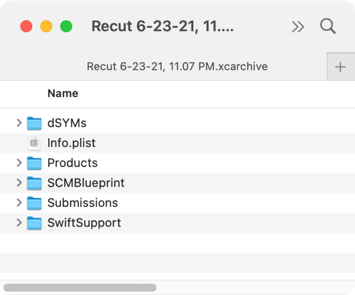 The files we need are in 2 places:

Make sure that you copy these files! Do not move them.

This xcarchive is your key to the kingdom… if you lose these files, you won’t be able to symbolicate crash reports anymore. So leave the original files alone, just make copies.

You should have a preinstalled command line tool called atos. From its man page, its job is to “convert numeric addresses to symbols of binary images or processes”.

Now in your folder you should have at least these 3 things:

You can manually symbolicate a single line by plugging a couple memory addresses into atos. For example, here are the first few lines of a crash in my app:

To look up the function and file where this crash occurred, I’ll take the first 2 memory addresses and run atos;

That prints out the location of the crash and I can go look it up.

7. Run a script to automatically symbolicate everything

I wrote a Ruby script to run the atos command on every relevant line and symbolicate the whole crash report in one go. It’s in this GitHub gist.

This will print out the crash report, but with your own app’s calls symbolicated:

You can pass the -g to colorize the output, to highlight the lines that correspond to your app’s code.

By default it hides threads that don’t include any calls into your app code. It also hides the big list of binaries at the end of the crash report. You can turn those off with flags.

I hope this helps you with your own app debugging journey!