Updated June 5, 2016 — rc 0
Angular 2 hit Release Candidate 0 in the beginning of May, which brought some changes. The sub-modules of Angular 2 need to be installed manually now, and the bootstrap function is under a different module.

And now, along comes Angular 2!

And they’re getting rid of controllers? Everything is a component now? What happened?!

“Looking at Angular 2 is like looking at a different programming language.”

Angular 2 looks all-new: new language, new syntax, new concepts. “This is gonna be like learning Angular 1 all over again, but worse!”

This is a fork in the road. A bit like The Matrix.

You can take the blue pill, and stay in Angular-land. Learn all the new changes, the similar-but-different syntax, and why they decided that importing 9 libraries was better than a single script tag.

Or take the red pill, and try out React. It’s a new world with some new concepts, but I think it’s a cleaner and more well-though-out world than Angular 2. After having tried both, I’m sticking with React. If you do decide to go the React route, check out the timeline I recommend for learning it so that you don’t get overwhelemed.

In this post, you will build a “hello world” app in Angular 2, using plain old JavaScript. No ES6, no TypeScript. And it’s gonna take about 5 minutes of your time.

Ready to get started?

This assumes you already have Node.js and NPM. Get those if you don’t!

Open up a Terminal. Create a new directory:

Create the package.json file with these contents:

Install Angular 2 and all its dependencies:

Create a new file called app.js in your favorite text editor. Type this out:

Type it out by hand? Like a savage?
Typing it drills it into your brain much better than simply copying and pasting it. You're forming new neuron pathways. Those pathways are going to understand Angular 2 one day. Help 'em out.

Create an index.html file and type this in:

Type it out by hand? Like a savage?
In an earlier version of this post, I advocated typing this in. Back in those days, it was only 2 script tags, which has ballooned to nine. I will hold no ill feelings if you copy and paste this HTML.

Load up index.html however you like. I like running open index.html in a Terminal (on a Mac).

So Easy! Such Angular!

That’s all there is to it. I told you it was easy!

If you’re curious about those script files being included in index.html, check out my Angular 2 Dependencies Overview.

Let’s look at what’s going on in this little app.

Angular 2 gets rid of directives in favor of components, but conceptually they’re very similar. Even their code is not that different. Have a look at this diagram: 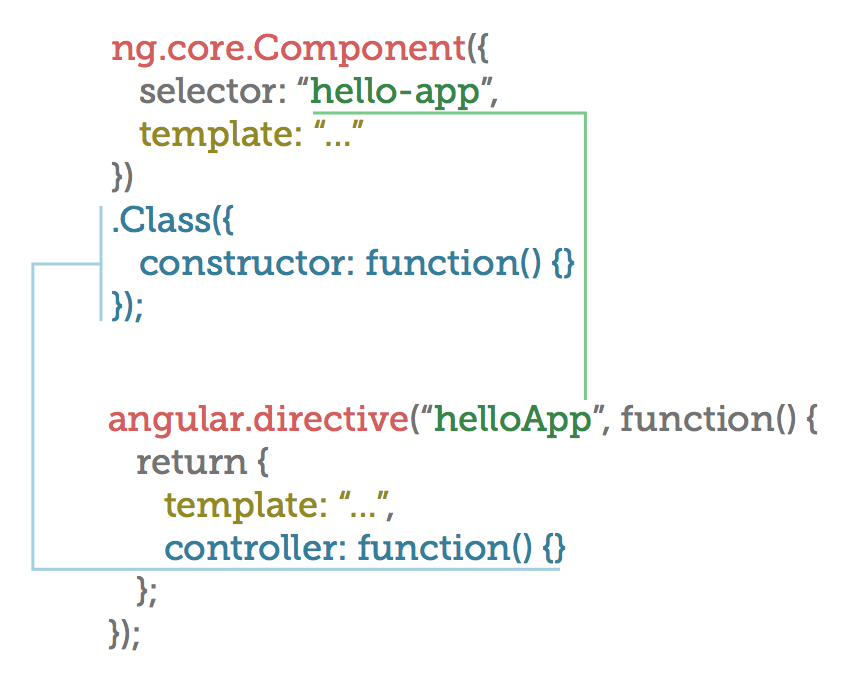 Both specify an HTML tag name (selector vs inferring it from the directive’s name).

Both have associated behavior (Class vs controller).

Both have a template.

Even the chaining syntax isn’t that foreign, coming from Angular 1.

Angular 2 comes with a function called bootstrap that initializes the app. This bit of code from above starts everything up:

It listens for a DOMContentLoaded event using plain-old JavaScript, then calls ng.platformBrowserDynamic.bootstrap with the root component.

This is a conceptual shift from Angular 1: Apps are composed of nested components all the way down. Everything is nested inside the root.

Now that you have a (super-basic) Angular 2 app running, you can begin to play around with it. Here are some things to try:

Create a new component that contains your name and render it after the h1 tag.

Add a ul tag with a nested li for each name.

Try to figure out the exercises on your own first. Refer to this example from the official Angular 2 docs - their syntax doesn’t look the same, but I bet you can work it out.

But if you’re truly stuck, the answers are below (hidden). Click to reveal.